"Joyfull Newes out of the newe founde worlde" 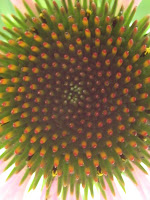 It's hot. I spent a large portion of the holiday on the couch reading 'Nature's Government', a book about "Science, Imperial Britain, and the 'Improvement' of the World". Yikes. There are some good bits about botanical history, though. Apparently, one of the driving forces behind botanical collections of the16th-ish century was to literally collect all the plants that had once been in the Garden of Eden and then scattered on account of events related to the fall.
Hence the "Joyfull Newes". If you could just gather them all back, in one place, in one garden, Eden would be returned and we could all call it a day.
Seems so noble. I'm not sure if it seems noble because it's so impossible or so optimistic or both. Maybe it seems so noble because there is an actual philosophy, crackpot though it may be, guiding a garden's design.
This is something I admire yet find difficult to adhere to. I understand the value of planting native species and restoring a bit of prairie, but coneflower, even with its hypnotic seed head, can get a little invasive and a little tiresome.
I waver. I see Giant Japanese Butterbur in a magazine and want it, native or not.
I'm working on a wish list of marginal plants that may take the place of some perfectly hardy, drought tolerant natives. I'll leave the ethics for another day.
Posted by KK at 9:32 AM

KK
Trying to find a garden in a standard Chicago lot